Awesome Article About the Headhouse!!!

In this month's issue of Philadelphia Style Magazine, the Headhouse Farmers' Market is profiled! What an honor to see some of our friends at the Headhouse make it into print! The article profiles the market in general and it's history, but also mentions some of our favorite vendors specifically like Tom Culton from Culton Organics (nice photos Tom), Matt Yoder of Yoder Heirlooms (a vendor we at the Feed highly recommend, everything we have ever purchased from them has been stupendous and Matt really knows his stuff), Ben Wenk from Three Springs Fruit Farm (a Philly Food Feed Friend), and others. Be sure to give this article a read and when you see these vendors next time you are at the Headhouse, give them a shout-out and a hearty handshake. These people are helping put the Philly farmers' market scene on the map! 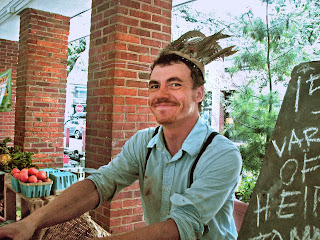 We actually visited the Headhouse on Sunday morning, which is our custom. We picked up pounds of peaches from Three Springs that have already made it into my cereal and into the baby's food. And speaking of Tom Culton, we purchased some heirloom tomatoes which adorned last night's salad and a cauliflower which we also ate last night with zeal. And even though we aren't Philadelphia Style Magazine (lol), Tom graciously let us sneak a quick pick of him and his pheasant feather crown which Tom explained was made by his girlfriend.
Speaking of last night's salad, I would be remiss if I didn't mention the heirloom sweet chocolate peppers that were also included. We purchased these earthy, attractive, mildly flavored beauties from Yoder's Heirlooms, specifically from Matt Yoder. As stated earlier, Matt always has a variety of exotic heirlooms on hand and will tell you about them with a knowledge that could only come from passion. Visit Matt next time you are at the market and ask him to tell you about what he's got. You will get an education AND some really great produce.
Blogger: Unknown at 2:06 PM

Thanks for commenting on The Philly Food Feed!

We here at the Philly Food Feed are devoted to the local food scene in Philadelphia as it pertains to sustainable agriculture. We dig farmers, farmers markets, Co-ops, CSAs, and the like. If there is somebody, somewhere in the Delaware Valley growing an heirloom tomato...we dig it! (not literally of course, unless its in our back yard). We also delve into national issues related to sustainable agriculture. We like to take pictures, post recipes, and wax poetic about asparagus. Join us!

If there is a market you would like to have listed or covered, please e-mail us at phillyfoodfeed@gmail. com

Find it on the Feed

Where We Have Been

What We Have Been Up To